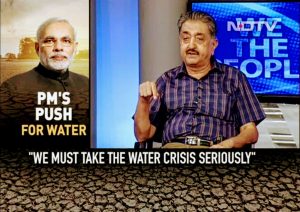 Prof. Manohar Khushalani one of the well known Environmentalists of India in a National TV Program

Er. Manohar Khushalani has designed dams and hydraulic structures for the Government of India. He is a programmer and has developed Engineering design software in Fortran. He is a co-author of Irrigation Practice & Design (Vol 1 to5 – 1500 pages) published by Oxford & IBH and sponsored by National Book Trust. He has been a Director, Environment and Sociology, at the National Water Academy, Khadakwasla and Director, Environment Management Directorate, Central Water Commission and Member Secretary, National Environmental Monitoring Committee for River Valley Projects. He was also Director of Instrumentation Directorate in the Dam Safety Organisation.  Dy. Director Concrete and Masonary Dams Directorate and Hydraulic Gates and Control Structure  Directorate. He was Chief General Manager and Head of Water Resources at Scott Wilson and is an accredited consultant with numerous other organizations

Having been in Design & Research Wing of Central water Commission he has been involved in a humongous number of Water Resources projects. The following is a list of projects he has dealt with in some capacity or the other:

PART I  Water and Environment

Spearheaded operations, Recognized & known in the Indian industry for many innovative concepts, strategic approach and industry benchmarking over the years. Successful completion of several projects, some of them are as follows:

Association with Indian Govt. (over 35 yrs)